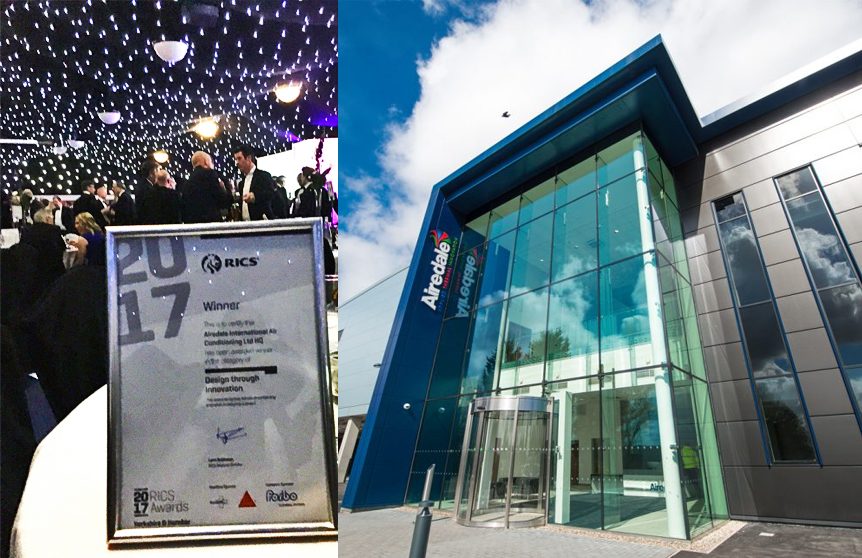 DarntonB3 is delighted to announce a further award win – this time in the RICS Yorkshire & Humber region Awards 2017. The superb new headquarters facility for Airedale International Air Conditioning Ltd carried off the honours in the Design Through Innovation category.

This award honours the use of outstanding innovation in designing a successful project. The judges looked for evidence that use of creativity and innovative design enhanced a project across a wide range of criteria.

The RICS judges praised the new building — home to over 300 staff — as world-class and said its new state-of-the-art research and development facility is particularly impressive, allowing Airedale to significantly increase its production capacity and lead the world market in their industry with the largest R&D facility of its kind in northern Europe.

RICS judges were also impressed with the building’s energy efficiency (despite it being 23,000m2 in size) with low energy lighting and heat recovery installed throughout, ensuring the building’s carbon footprint is kept as low as possible.

In addition to this win DarntonB3 was also involved in two further projects that were shortlisted in the awards. Firstly, the new Graves Health & Sports Club, Sheffield, shortlisted in the Leisure & Tourism category and also Goldthorpe Primary School, a Highly Commended scheme in the Community Benefit Category, where we acted as architect for design and build contractor Robertson for the delivery of the project.

The Airedale Air Conditioning project now goes forward to the 2017 national RICS Awards in the Design Through Innovation category, an award that will be announced in November.